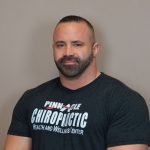 Dr. Craig Banks is a chiropractic sports physician, health and fitness expert, inventor, author, speaker and philanthropist. He is 2003 graduate of Palmer College of Chiropractic, in Davenport, IA. He is originally from Youngstown, Ohio. He is an alumni of Kent State University, where he wrestled, and initially began on the path to being a neurosurgeon through Northeastern Ohio Universities College of Medicine. Due to the low success and satisfaction rates of the medical profession, he decided that a chiropractic career was right for him. He was one of the first D.C.’s in the state of Ohio to complete a recognized internship in Chiropractic. Dr. Banks has opened four chiropractic offices (Pinnacle Chiropractic Health & Wellness Center) across the country and continues to consult others. He is currently a member of the American Chiropractic Association, the Ohio State Chiropractic Association, the American Academy of Spine Physicians and International Society of Clinical Rehabilitation Specialists.

Dr. Banks founded Phoenix Bioperformance Products, and invented their primary product, KinetiCream.  It is used worldwide by athletes, arthritis sufferers and anyone who has pain and inflammation!

While at Palmer, Dr. Banks played Men’s Division I rugby. He is a former state powerlifting champion and currently a NPC competitive bodybuilder and youth wrestling coach. He understands the needs of athletes, whether recreational or professional, because of his own personal experience. Dr. Banks has given on field support to several rugby teams, and off field support to hundreds of athletes at local and national sporting events. He has treated several professional wrestlers from two major televised brands and a handful of mixed martial arts fighters. Dr. Banks was the team physician for a semi-pro basketball team and currently helps with many professional baseball players and other college athletes. He has traveled overseas to Hungary to assist in providing free chiropractic care to not only people in desperate need of any form of health care, but also the Hungarian Olympic athletes that were training for various sports. In March of each year, Dr. Banks heads to Columbus for the Arnold Classic and the International Chiropractic Association’s Symposium on Natural Fitness, which is headlined by Governor Arnold Schwarzenegger. At the fitness expo, he is often a staff doctor, helping to provide trauma care for the over 17,000 athletes. In fact, the event is larger than the Olympics.

At home, Dr. Banks is married to his fantastic wife Courtney.  He has a son, Alex, and a daughter, Taylor. They reside in Kent, along with their “mutt”, Kodiak and five (yes, five) cats, Rocky, Apollo, Mick, Drago and Paulie. I’m sure you see the theme.

Dr. Banks can be reached for speaking engagements, interviews or expert witness testimony at contact@pinnaclechiro.com.