What a Cleveland Championship Would Mean to Me

What a Cleveland Championship Would Mean to Me 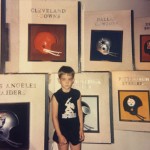 In the piles of photos in the house that I grew up in, you will find pictures of me from age 5 and up sporting all different sorts of Cleveland sports clothing.  I used to buy make-up sticks that were brown, white and orange to put colors in my hair and on my face for Cleveland Browns Sundays.  Numerous Indians jerseys and shirts hung in my closet or sat folded neatly in my drawer.  I remember my first Cavs game with my father at the Richfield Coliseum.   (I won’t lie, I was a huge Michael Jordan fan, so I gravitated towards the Bulls as child, but Cleveland was still a massive favorite.)  I remember going to a few Browns games, and a few Indians games at Municipal Stadium.  The first time seeing Chief Wahoo from the road as he perched on top of the stadium wall is such a vivid memory.  If any of the Cleveland players were going to be signing autographs somewhere near my hometown of Youngstown, we’d be there and wait in a line of any length to get that signature. 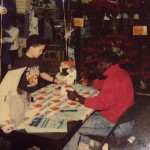 Baseball and football card packs were bought, but it was a disappointment unless you got a Cleveland player.  Bumper stickers adorned the doors entering into my bedroom.  A Browns helmet lamp was in there, as were Cavs over-the-door basketball hoops.  Indians sundae helmets from Dairy Queen and full size plastic ones from the ball park were all over the place, still with the original block “C” design.  Not many days of the year were untouched by the love we had for Cleveland sports.  And why not?  We had teams.  We had players.  We even had wins.  What we didn’t have, however, was a championship.   That one validation to say that WE were the best.   Man, we were so close so many times. You all know the stories, The Drive, The Fumble, The Shot, etc…  No sense in me making you relive all of those memories once again.  If you want that, watch “Believeland”.

I remember the disappointment of those times as much as I remember the living room in my parents’ house where I watched the games in most times.  Cleveland sports were about family for me.  We didn’t have a ton of disposable income, so TV was how we had to see the games.  It was time that my father, my brother and my mother all rallied around, cheering for the Browns, the Indians and the Cavs.  (It’s not that my sisters didn’t like sports, but they weren’t nearly as interested.  Even when they were, they were more concerned about John Elway or Dan Marino’s looks under the helmet instead of what they did on the field, which made them Broncos and Dolphins fans.)  Sure, we would all get so emotionally invested in the team, so it was indeed a let down to keep losing, but at least it was a wonderful thing to share in as a family.

As I moved off to college at Kent State, took a job and made some money of my own, I would find time to head to Jacobs Field with my friends to watch the Indians in person.  This happened to be in 1996 and 1997 when we were going through great seasons.  As an 18 year old at these games with friends, I felt more like an adult, but the passion for the teams didn’t waiver.  Maybe a little less face make-up, but I can still find tons of pictures with me in Browns, Indians or Cavs gear.   I attended chiropractic school in 1999 out of state and lived in Iowa for three years.  Even away from Ohio, I found time to head to Indians games in other cities.  We were closed to Chicago, so we saw them play the White Sox, but we also went to the beautiful Kauffman Stadium in Kansas City.   I would call my parents and talk for hours about the Tribe, the Browns or the Cavs and how they were doing.  It was still an exciting topic, even if we weren’t winning a ton of games.

I graduated chiropractic school in 2003 and returned to Ohio.  When I had my children, they went to Indians games.  I think my daughter was less than a month old at her first one.  Cavs and Browns games aren’t spectacular places for very young kids, but they were still fans.  The Cavs drafted LeBron James when my son Alex was exactly seven weeks old.  As he grew and learned to talk, he watched basketball through LeBron’s first stint with Cleveland.   His favorite shirt was his LeBron jersey.  His birthday, every amusement park, and pretty much the entire summer, he was in it.  Unless, of course, we were heading to an Indians game, which we continued to do as they grew.  He even wore an Indians jacket to his first day of Kindergarten.  My daughter Taylor sported her own Cleveland gear growing up.  She had a pink Indians cheerleader outfit when she was very young, and graduated to a red and blue one later.  She’s had Browns and Cavs shirts, jerseys, coats and every other possibility.

Sometimes, my parents or my brother and his family would come with us to see Cleveland play, and sometimes my high school friends would meet me downtown and we’d catch a game.  So many walk-off homers by Hafner and it seems like we were there for all of them!  I also remember being downtown for an Indians game, watching that, and immediately going outside of Jacob’s field to watch the end of the clinching game to send us to the 2007 NBA finals.  The city was electric.  What a feeling and what a time to be a Cleveland fan.

We’ve had some lean times since then.  Baseball hasn’t quite had the impact it once did on the city.  LeBron took his talents away for a bit.  The Browns… Well, there’s not much good to say there.  But now we’re back in business.  Thanks, LeBron for bringing your talents back and thanks to Dan Gilbert for making a huge commitment to this city to bring us a championship.

My children are now 13 and 10.  They are multi-sport athletes.  They are huge Cavs fans.  I’ve been fortunate to have Cavs season tickets for the last three years.  Yes, I got my package before LeBron came back when wins were a little harder to come by.  The kids have gone with my fiancée Courtney and me to many games over these years.   We’ve gone to an Indians game in Baltimore and a Cavs game in Denver on trips.  I am also the chiropractor for the Cleveland Gladiators, so the kids have been to many of those games and know the players by name and the players treat them wonderfully.  We were just at the Lake Erie Monsters championship game as well.  (What a rush to get a minor league championship, but that could only be a slight tease as to what a major sport championship win would be.)  My mother and father both passed away within the last three years, so I really miss the ability to call them and talk about the games.  I would give anything to have them back and have them be able to see the positivity that is currently happening with the Cavs and Indians, and I hope the Browns.   Courtney and I have been so locked in with this Cavs team over the last three years and have seen the games go from just “something fun to do” to becoming one of our biggest forms of entertainment that we do together.  Sometimes, just the two of us will go.   Other times, the whole family will go, and sometimes we will bring some of my close friends.

So here we are.  Game 7 of the 2016 NBA Finals.  Cavs versus Warriors.  One game, 48 minutes, to make history for this city.  I know people always say, “It’s just a game.”  I disagree.  I understand that there are bigger problems in the world, but sports are truly a way to keep the human connection intact.  There is so much emotion involved now.   We have listened to these players and connected with them.  We have seen their personalities and we have found common ground in that we all want to see an end to these 52 years without a major sports championship.  Their intensity on the court has been phenomenal these last two games.  We see other fans, all cheering until their voices give out.   Cleveland isn’t even hosting the game, and the city is expecting record crowds downtown.  The Q has its amazing Watch Party again.  We will be there with friends to watch the game.  I can’t wait.

Radio host Dustin Fox keeps talking about how this is “the movie”.  I hope he’s right.  If they win, it will be like a movie.  Against the odds, a team will have knocked off the best regular season team in history and came back from a 3-1 deficit to do it.  Just like any great sports movie, The Rocky Story, Rudy, Varsity Blues, Hoosiers, Major League just to name a few, I’ve already got that back of the throat feeling when you feel things might end the way you want.

So, what would a championship mean to me?  It’s validation, of course.  Yes, it’s proof that our city can rise above.  Really for me, however, it gives a satisfaction that is extremely difficult to put into words.  I’ve spent all of my thirty-eight years rooting for Cleveland teams.  Most importantly, my family has grown together through us all rooting for Cleveland sports.  Maybe it’s no coincidence that his game will be played on Father’s Day.  As a son to my father, although he has passed, I could see what hadn’t since he was 19 years old and what I know he would have loved.  As a father to my children, it starts a new tradition of winning teams that we can pull for.  It truly has been like a great movie I’ve been watching together with all of my family for so long.  A win is the happy ending we want.  My family, your family, this city, this team DESERVES a championship.  I don’t know about you, but I’ll probably drop a few tears of joy in celebration if it happens.  I won’t feel bad about it.  I cry at the end of almost all happy-ending movies.  Go Cavs!